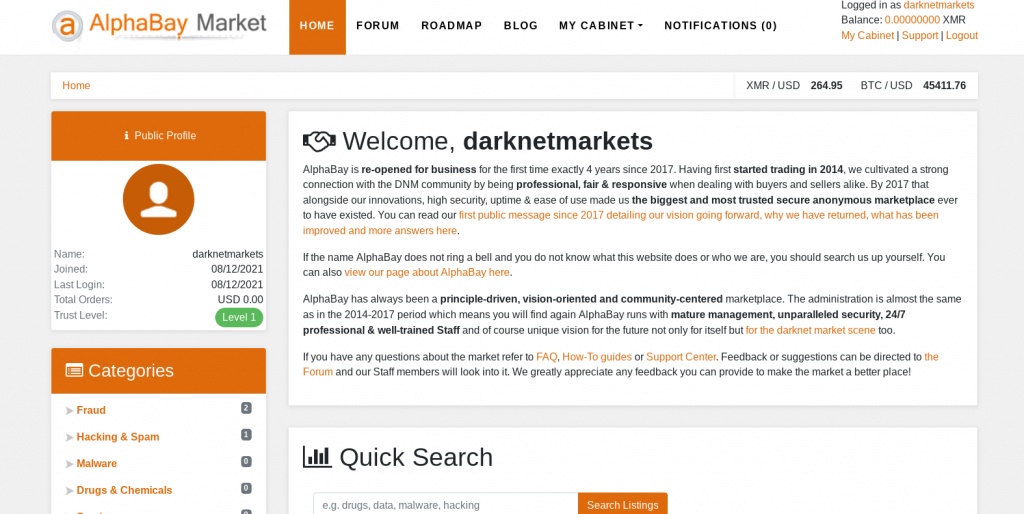 Seven months after the return of DeSnake, one of the original AlphaBay’s two administrators, the new incarnation of the infamous darknet market is once again on top of the competition — sans Hydra, the Russian-language darknet market which still dwarfs all others in sales volume. The distinction comes about as its closest competitor in size, World Market, has been largely deemed no longer operational, even if the site remains technically accessible.

The rise of the “new” AlphaBay is not something that much of the darknet market community was expecting as many feared it was simply an extravagant “honeypot” operation designed to collect the credentials of buyers and vendors. For its first few months, the market remained relatively void of users and activity. However, with over half a year of steady operation under its belt and an ever-increasing base of users, these fears have largely subsided, and AlphaBay currently enjoys its greatest degree of popularity yet in this new manifestation.

AlphaBay now hosts over 22,000 listings and is home 5,228 vendors and 340,000+ buyers, according to statistics maintained by the market. It is now a Monero (XMR)-only market and forces its users to operate under some of the strictest guidelines to ever be implemented by a darknet market. These include a no-weapons and no-fentanyl policy, short-timed finalization periods, and an advanced captcha system that has proved capable of preventing DDOS attacks from occurring.

After a slow re-start, activity at AlphaBay is now bustling.

The recent string of darknet market closures in 2022 has also helped AlphaBay’s propulsion to the top of the list. World Market, previously the largest (English-speaking) market by sales volume, has all but closed shop, as admins on Dread have repeatedly warned users against making new deposits to avoid losses in the likely event of an exit scam.

Within the past week, World Market added the following message to its main market page, although accounts registered within the last six months (sans brand new accounts) are still unable to log in to the market:

“World Market is operational again, listing images will be restored soon, if you are missing a deposit open a ticket.”

AlphaBay also seems to be making some strides in its promises to delivery a decentralized darknet market – the first of its kind – that can theoretically continue to operate even if service provided by an operator is discontinued, for whatever reason. Upcoming tasks have been scheduled in the market’s roadmap for the project, and include building payment modules, multisig and escrow core functions, and a way for network operators to provide “initial decentralized infrastructure report.”