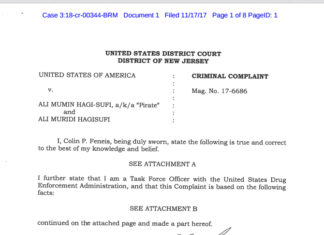 A New Jersey drug operation which originated on the dark web has resulted in the seizure of over 10 Kilos of cocaine in total, with over 3 kilos discovered in a Monmouth County stash house.

DEA agents searched the home in New Jersey on August 30th and uncovered 4 kilos of cocaine from the property. After the initial raid, the LE source informed the police that they had purchased cocaine and other substances from a darknet market vendor known as Pirate on the now-defunct AlphaBay Market.

The LE informant cooperated with the DEA in an attempt to arrest Pirate, the darknet market vendor.  The source contacted Pirate and arranged for him to ship the source a package of cocaine and marijuana, and in exchange, the source would pay Pirate an amount of bitcoin and ship Pirate’s customers fentanyl.

In September, the court papers show that 7 kilos of cocaine arrived in New Jersey. The shipping receipts that Pirate had sent to the informant shows that the packages had originated in Southern California.

Pirate requested that the informant ship 2 kilos of fentanyl press pills to a customer in Minneapolis.  The informant agreed, and working with Law Enforcement, 2 kilos of fake pills were shipped to the customer address. US Postal Inspectors attempted a controlled delivery of the fake pills, but nobody came to the door.

Over the next month, Pirate contacted the informant and discussed shipping up to 50 kilograms of cocaine to New Jersey if the informant would be interested in shipping fentanyl to Minneapolis. At this point, Pirate offered to visit New Jersey, along with his cocaine supplier so they could meet the informant in person.

The informant agreed to the meeting and they arranged for Pirate to pay $100,000 USD for the informant to supply a person in Minnesota with a large quantity of fentanyl.

In November Pirate flew to Newark Liberty International Airport and arranged for the informant to meet him at his New Jersey hotel.

The informant traveled to the hotel, along with an undercover DEA agent who was hiding a recording device.  Pirate introduced himself as Ali Mumin Hagi-Sufi and introduced his cocaine supplier, Ali Muridi Hagisufi, to the informant and undercover LE.  Ali Mumin Hagi-Sufi (Pirate) gave the informant $20,000 USD and assured the rest would be provided from someone on coming the next day. The also discussed an ongoing exchange of cocaine and fentanyl which would span across Ohio, Minnesota, and Tennessee.