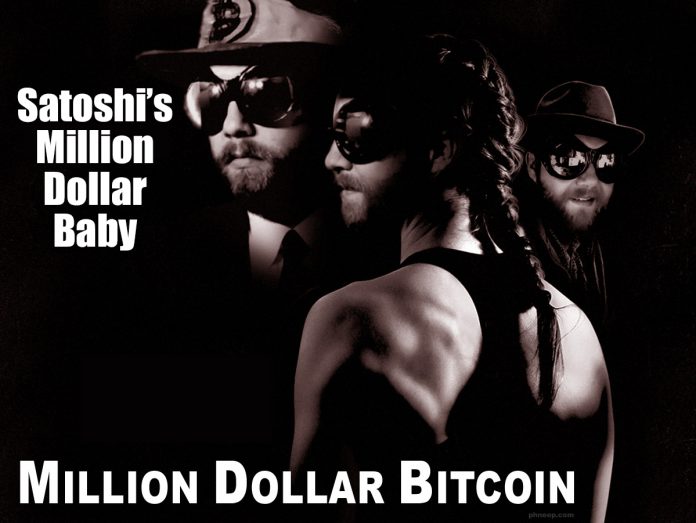 Bitcoin is about to become Satoshi’s million dollar baby.

When the enigmatic Satoshi Nakamoto gave birth to Bitcoin on the third of January, 2009, he had no idea of the cataclysmic, sweeping repercussions of his unique solution to the double-spend problem. Although he was neither a superhero programmer nor a superstar mathematician, he conjured up an idea that would change the world forever.

The notion of million-dollar Bitcoin may seem damnably unrealistic, but consider that Bitcoin – trading for pennies in 2009 – has soared to almost $1000 USD. From a humble dollar to a cool g-note represents a 100,000% rise. From a thousand dollars to one million dollars is also a 100,000% rise. Bitcoin’s track record for spectacular appreciation is indisputable.

The rise of Bitcoin has been anything but steady and reliable, with the price leaping and tumbling on the whim of an unfavorable news report, a hacked exchange, an abominable theft, or some ugly news out of China. Nonetheless, the trend has been inexorably upwards, and we have no reason to believe this trend will change. Here’s why …

Pity the fool who tossed away his hard drive with seven million dollars worth of Bitcoins on it. Those coins are gone forever, recoverable only by God. This type of tragedy occurs daily, though usually with a less epic loss. People forget their passwords, misplace their private keys, or fail to back up a hard drive before it crashes. The Bitcoin supply must go down, not up, once all twenty-one million coins have been mined.

And the demand will go UP. Always up. As people discover new uses for the cryptocurrency – and as folks in the developing world come to realize its superiority to national currencies – adoption must increase over time. The so-called ‘mass adoption’ that early adopters predicted failed to materialize because, in the western world, Bitcoin is still a solution without a problem. It’s great for buying drugs on the deep web, but Paypal or credit card works fine for most online purchases. While Bitcoin is actually easier and safer to use than Paypal or credit card, the marginal benefits of cryptocurrency have not proven palpable enough to trigger the mass adoption that geeks expected back in 2013. Another impediment to mass adoption is stupidity. You don’t have to be smart to use Bitcoin, but there is still a prevailing attitude that only ‘nerds’ can figure it out. While that simply isn’t true, the slow pace of mainstream adoption surely has something to do with the average person’s lack of confidence in his or her ability to understand cryptocurrency. Once people realize that using Bitcoin is no more complicated than using Paypal or credit card, the pace of mainstream adoption will quicken.

In the developing world, all bets are off. Credit cards are rare, and Paypal has blocked many accounts in India and Africa. Worse, huge numbers of people across th globe remain ‘unbanked’ because they lack access to safe, reliable banking services. Third-world banking is like the Hotel California; the money goes in, but it never comes out, which goes to show that the best way to rob a bank is to own one. The main impediment to immediate Bitcoin mass-adoption in the developing nations is lack of Internet access. As third-world Internet infrastructure improves, billions of folks in the developing world will flock to Bitcoin.

So it is inevitable that we will see usage increase over time, with mass adoption occurring first in the developing world, where Bitcoin is most needed, and more slowly – but inexorably – in the western nations, where Bitcoin is already being used as a value-store alternative to gold.

Many Bitcoins have already been removed from circulation, not just from loss of private keys but also from hoarding. As Bitcoin becomes more stable and legitimized, investors looking for a safe haven asset are increasingly turning to Bitcoin instead of gold, which is partly responsible for the price collapse of the yellow metal. Bitcoin is preferable to gold for a number of reasons, not least of which because it has gone up 100,000%! Gold has no hope of any comparable meteoric price increase; as the price of gold rises, gold supply rises with it, because of the incentive for miners to unearth more gold. As the price of Bitcoin rises, demand increases, but supply remains utterly unaffected by the bull market; nobody, not even Satoshi Nakamoto himself, can tinker with the supply of Bitoin. Furthermore, Bitcoin offers fungibility and utility, whereas gold languishes in a bank vault. Long-term Bitcoin investors (hoarders) drive the price up by stripping Bitcoins from the marketplace. As national currencies grow weaker and weaker, we can expect Bitcoin hoarding to increase, further boosting the price by reducing supply.

It doesn’t take a genius or a disciple of Adam Smith to realize that as demand goes up, and supply remains constant or declines, the only possible price movement is towards the moon.

The eight-hundred pound elephant in the room is the altcoin. Any altcoin. What happens if an altcoin, such as Monero or Zcash or Ethereum, replaces Bitcoin? This is never, ever going to happen. Bitcoin benefits from what economists call the ‘network effect,’ meaning that its value derives from the number of people using it. The infrastructure built around Bitcoin is already gargantuan, with hundreds of thousands of websites accepting BTC and Silicon Valley investors pouring money into Bitcoin startups. No other altcoin comes close, even though many of these coins actually work BETTER than Bitcoin. Many social networking sites also work better than Facebook (which, in my opinion, SUCKS), but Facebook has no rivals. Why? Network effect! Would you hop onto another social network if only a few thousand people in the world were using it? No. Hell no.

Bitcoin benefits from a monstrous network effect, but its primacy derives from more than that. Bitcoin, like gold, has value because people want it. If the people who wanted Bitcoin suddenly decided they wanted some other altcoin, like Zcash, the value of Bitcoin would surely plummet – but the value of all cryptocurrencies would similarly plummet. Investor confidence in the entire cryptocurrency market would melt overnight if the majority of people simply flocked to ‘the next big thing.’

So where is Bitcoin heading? Short-term price gains are anyone’s guess, but the long-term trend is UP, UP, UP. I have heard people throwing around the number one million for a future price of Bitcoin – Satoshi’s million dollar baby.

June 15, 2021
A Guide to How to Use PGP: Generating Key Pairs, Encryption & Decryption 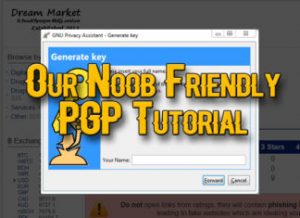 A Guide to How to Use PGP: Generating Key Pairs, Encryption & Decryption 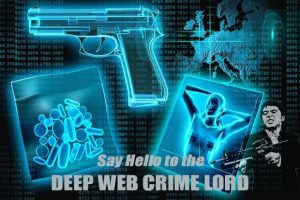