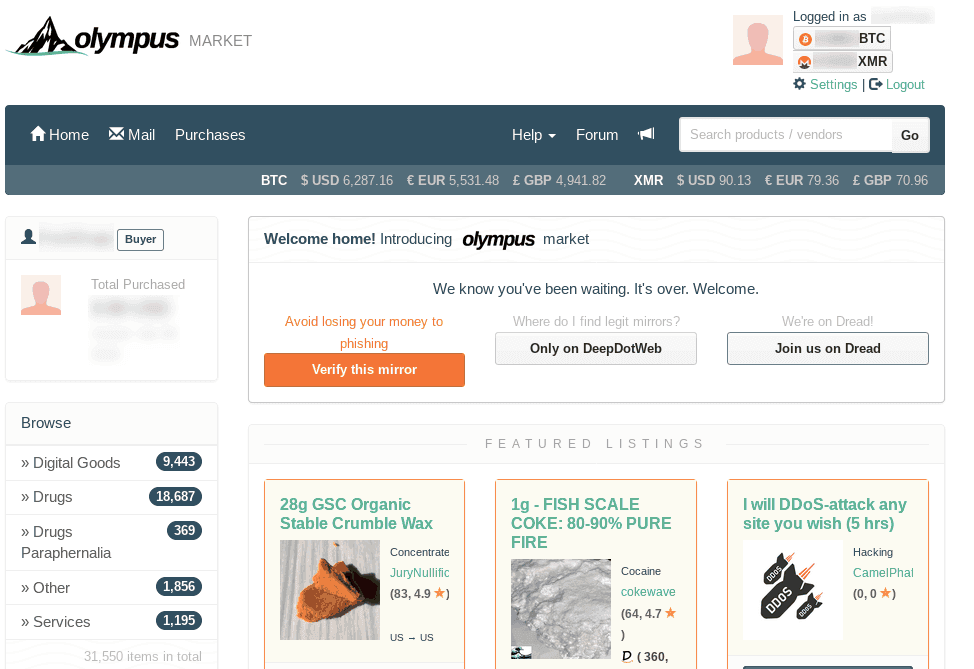 but in hindsight… we all pretty much saw that coming, right? Well…everyone besides Ori and Apollo, who you can’t help but feel at least a little bad for. Ori and Apollo are two of Olympus Market’s forum moderators. Both were sidelined and left in the dark by the Olympus Admins who as of today, have not been heard from in nearly a week.

The issues began last week when vendors at Olympus Market noticed their orders were not finalizing. 6 days ago Olympus published a post in Dread, blaming the same Monero bug that allegedly drained Dream Market’s hot wallet as the reason for the finalize issues, while the rest of the blame was pushed onto strained server resources due to a phisher running a reverse proxy off their site.

The following day the main links for Olympus went completely offline, eventually, this was followed by the Olympus Forum. While we noticed a couple old mirrors of Olympus were still loading fine, those too went dark just a couple days ago. Around that time Olympus was stripped off the DeepDotWeb Top Markets list after receiving the news on Olympus’s current status from HugBunter of Dread.

The forum moderator Ori contacted dread stating “Since today the site is down. All communication channels are dead. There is no way for me to contact any of them.” it was then that the Admin of Dread declared they officially consider Olympus Market an exit scam, based on the lack of an official response from the Olympus Admin and because of the information shared from the Olympus Forum moderator.

Our Admin (DNetSEO) also attempted to reach the admins of Olympus a few days ago, and we also have not received a reply..but that was expected. To be perfectly frank, I figured Olympus would have vanished way sooner than they actually did. Mostly because of how they Just kind of showed up on Reddit last January with a professional looking website, which functioned perfectly and had an overall professional appearance, minus some security issues. What got our attention was the Admin’s claim that their team was darknet market veterans with years experience in managing darknet markets…yet nobody seemed to know who these people were, and by not disclosing the markets they helped within the past I pegged them with red flags from day one.

After about a month of being online, we at Darknet Markets News reached out to the admin of Olympus with a request for an interview. Not only did they agree, they seemed eager to do it. Free advertising. All was going fine until DNetSEO emailed them the list of interview questions which resulted in them dropping all contact with us for over a week before sending us an email claiming they were not interested… due to u reasons he would not mention.

Apparently, DNetSEO did some digging and discovered several key indicators that some of the Olympus admins/staff were involved with a previous darknet market or darknet markets that had pulled an exit scam. While as per usual the interview was filled with idiotic questions we ask Darknet Market Admins during interviews, like “If you HAD to have sex with a pokemon which one would it be and why?”(Just an Example), but it also included A FEW SERIOUS questions about the red flags DNetSEO found. I gather that scared them off. And because of that, we are now too hesitant to ask good interview questions out of fear of the Admin becoming uncomfortable and canceling on us.

Beyond that, there are other Olympus related reports buzzing in the Dream Market forum. Allegedly Olympus Market Admins are using their customer’s login credentials to access accounts on other markets to bleed their wallets dry.

I won’t say “They kind of had it coming for re-using passwords and not using 2FA login”. So be smart. If are guilty of re-using the same on multiple sites then please take a couple minutes right now and go update them. Also set up and secure your accounts with 2FA.

For the new Olympus refugees looking for an alternative darknet market, there are two recommended options. One is for those looking for an established market with lots of options, Dream Market is the by far the biggest. Though there are several complaints about shady support moderators and funds disappearing from peoples accounts. couple options. For those interested in newer, well-designed sites with higher rated customer support, will be better off checking out Empire Market (inspired and modeled after AlphaBay) or Rapture (which is similar to Trade Route).

FunFact: Our reports suggest exit scams cause a major increase in vendor scamming by both shady vendors who are capitalizing on the general confusion, and trusted vendors strugglings to cover their loss bitcoin, product and time before their supplier shows up in the middle of the night and buries two 9mm slugs in their dog over not repaying the fronted product from last month.

Is it possible that Olympus could jump back online tonight or tomorrow? Sure, of course, it is. Many people had assumed Rapture had pulled an exit scam after they were crippled for over a week by an aggressive DDoS attack. But, I doubt that’s the case given the entire galaxy of red flags which surrounds Olympus. But I also doubt this is the last time we hear from them. I estimate within the next two years they return to the DNM grind with Olympus Market donning a fresh coat of paint and re-branded under another cliche and meta title like Wolfenstein3D Market or HansagoraReloadedv3.1.