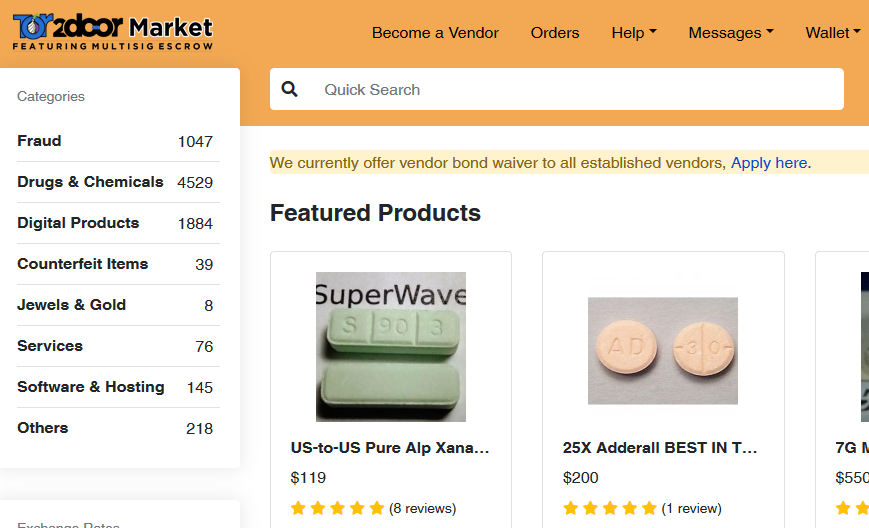 A now-deleted post by Dread admin Paris announced the market had likely exit scammed; a conclusion based on the fact the Tor2Door admin had been ignoring concerns regarding withdrawals for over a week. Paris went so far as to revoke the market admin’s access to the Tor2Door subdread, noting he wanted to prevent scam accusations from being deleted. The market otherwise remained available and functional, leaving room for the possibility of a technical problem.

“FWIW I received $350 in BTC 5 days ago from the market,” wrote one verified Tor2Door vendor on Dread. “Seems like it’s mostly, if not entirely, XMR that’s being withheld which could lend credence to the exchange gone wrong theory. Fishy as all fuck though.”

Within a few hours of the post by Paris, the Tor2Door admin apologized and began addressing concerns of vendors on Dread. The admin, going by the forum name needsadesigner, reported a “flaw” in their “exchange system,” which they were currently attempting to resolve. Shortly thereafter, another vendor commented that the market had released a portion of their funds as a sign of good faith, helping to put fears to rest they had exit scammed.

The explanations of what had happened seemed to satisfy Paris, who removed his warning about Tor2Door and reinstated subdread rights for the market’s page to its admin. Reports from other vendors receiving partial repayments have been posted to Dread within recent hours, confirming that the market’s issues now appear to be more-or-less under control.

“Shaking the bush worked, i got a hold of /u/needsadesigner and he has been talking to me,” wrote another verified Tor2Door vendor. “He has stated that the communication failure is unfortunate, but they’re working to prove they are still here. They have agreed to send me 1k right now to show their good faith.”

Tor2Door opened in June 2020, getting its first mentions among the community as the go-to option of choice for buyers and vendors of the exit scamming BitBazaar market. It currently has about 7,500 listings with the majority being in the Drugs & Chemicals and Digital Products categories. The market accepts Bitcoin and Monero and uses the traditional account wallet system for payments.