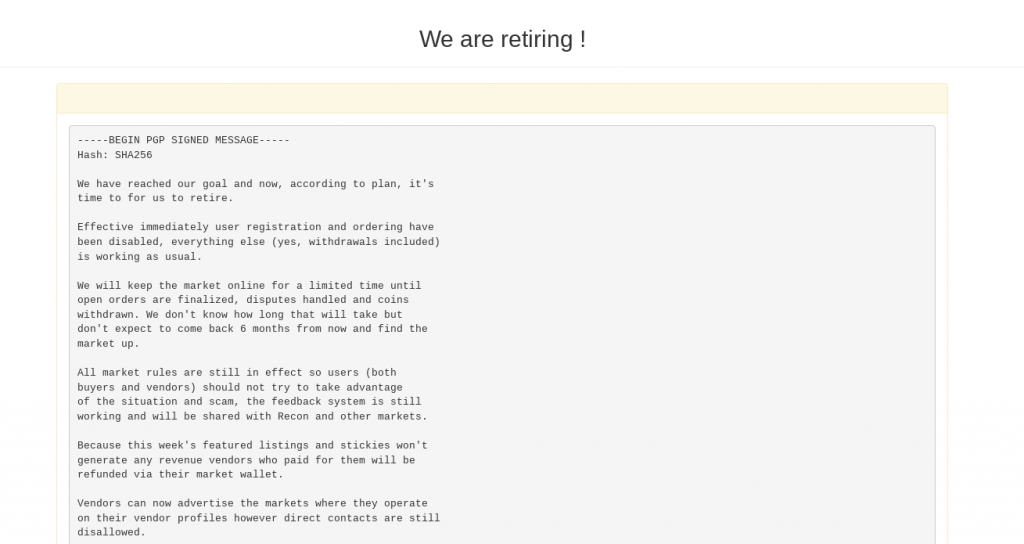 One of the world’s biggest and most well-known darknet markets, White House Market, announced on Oct. 1st they would soon be going into retirement, ceasing order placements immediately and winding down other operations. The announcement comes on the eve of the 8-year anniversary of the shutdown of Silk Road, the original darknet marketplace.

Per the message signed by White House Market admins, users can still withdraw their remaining balances and communicate with others until the market goes offline, estimated to be sometime within the next six months.

The market, which was popular among European and American customers, is closing at the peak of its prime, with over 3,400 active vendors, 42,000 listings and 287,000 daily visitors in the weeks before Friday’s announcement. Displaced vendors are being given the opportunity to update their profiles to let customers know what other markets they can be found on in the future.

Opening for business in early 2020, White House Market was different from many other markets in that it was built from entirely original coding and without the use of market scripts. It was one of the first markets to ditch BTC, going Monero-only, and switch to the wallet-less, per order payment system (Direct Pay). These features earned it a positive reputation among the community, along with the market’s readiness to learn from the mistakes of its peers. Buyers and sellers flocked to White House particularly after a wave of market closures in the first half of 2020.

“We have reached our goal and now, according to plan, it’s time to for us to retire,” reads the message signed by the admins, which goes on to assure users it is not exit scamming, and even promising to refund vendors who had recently paid for featured listing space. The message also encouraged former customers to give new markets a chance, praising Monopoly and Versus markets for their innovation.

“Thanks everybody for your business, trust, support and of course for placing decent amounts of money in our pockets. We may come back some time in the future with a different project or we may not… Good luck and stay safe.” – White House Market admins